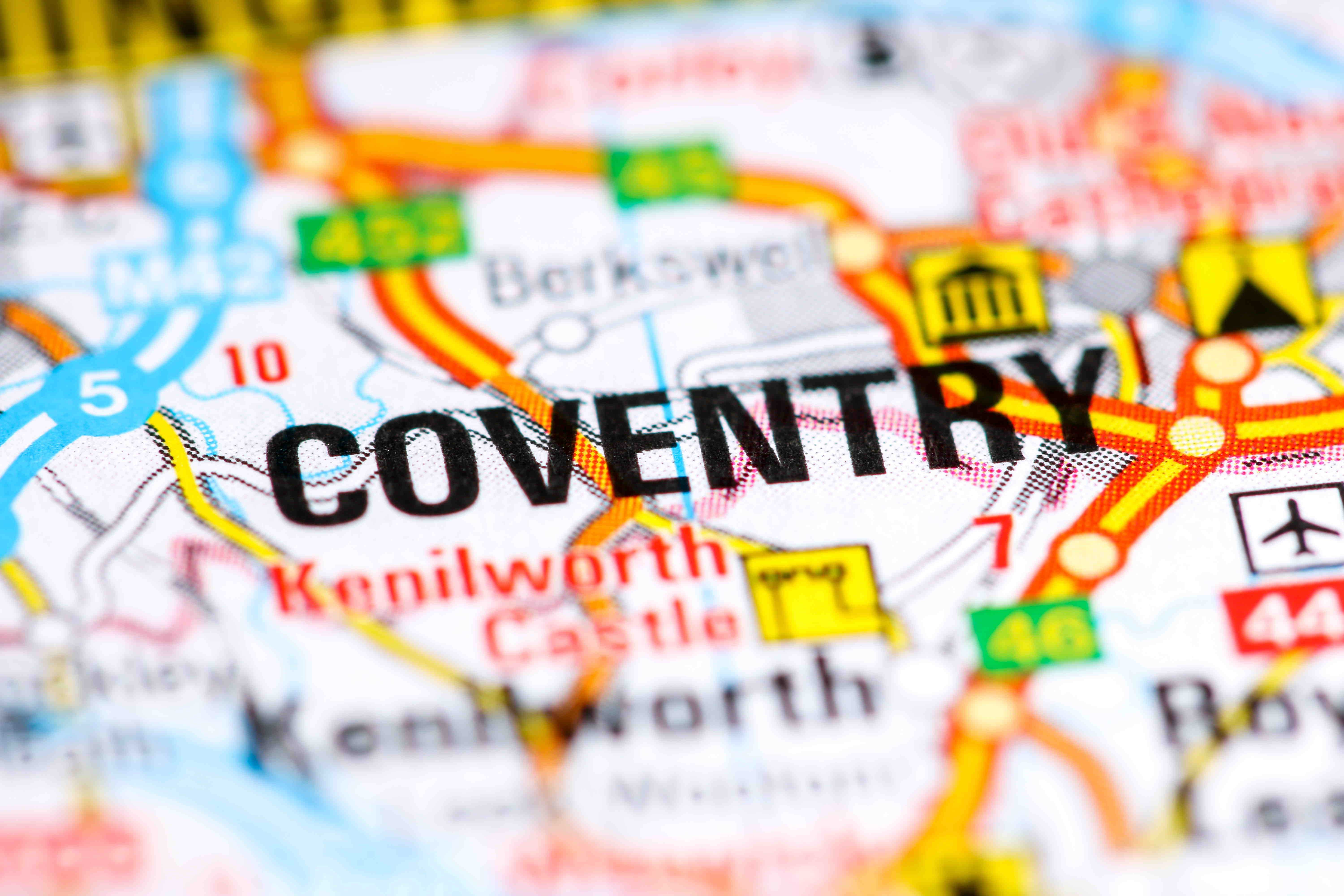 Coventry has come a long way since its humble beginnings as a small Roman settlement.

Now one of the 11 largest cities in the UK, it’s set to become the country’s City of Culture in 2021 having seen off competition from Sunderland, Paisley, Stoke-on-Trent and Swansea.

With three universities and a host of industry, Coventry is something of an employment hotspot too, rivalling lofty near neighbour Birmingham.

Just 19 miles south east of Birmingham, Coventry is one of the most central cities in the UK, meaning property hunters with transport links on their minds are perfectly positioned to reach almost anywhere inside three hours.

As well as that central position, Coventry offers a superb mix of culture, great schools, open space and top-level sport – and it’s all of that, coupled with great properties, that see buyers and renters flock here year after year.

Houses for sale in Coventry

There’s great value to be found among Coventry property for sale, with average prices nicely below the UK national average.

Buyers can expect to find some Victorian and Edwardian homes in Coventry, but the majority of property for sale in the city is from the 20th and 21st centuries.

Those set on a period property should head towards the Chapel Fields and Earlsdon areas, where rows of quaint terraces dominate.

Areas like Canley and Cannon Park, meanwhile, feature good sized family homes from the 1970s, while villages like Allesley, Mount Nod and Stoke Park are great for traditional cottages.

Bungalows for sale in Coventry

Buyers looking for superb bungalows will find great options in places like Allesley and Earlsdon, while the village of Barnacle also offers some nice single-storey properties.

The village of Shilton, close to the M69, is also a good spot for bungalows.

Flats to rent in Coventry

Among the flats to rent in Coventry are modern, purpose-built blocks, 20th-century buildings and some period conversions.

Popular with young professionals working in the city or commuting to Birmingham, flats and apartments close to Coventry station are hugely popular with renters.

A number of new build developments have completed in Coventry over the past few years, with the latest new houses at Ash Green, north of the city, worth checking out.

First-time buyers and investors, meanwhile, should take a look at the new apartments on Queens Road in the city.

Close to the station and to all the city centre amenities, the properties are finished to a very high standard.

How to get to Coventry

On the roads, the M1 and M40 from London take drivers to the outskirts of the city, while the M6 from the north west runs north of Coventry, into Birmingham and on to Stoke-on-Trent and Manchester.

The M1 north links the city to Nottingham and Sheffield.

West Midlands train services from Birmingham New Street arrive in Coventry in 30 minutes and services from London Euston reach the city in around an hour.

Much of Coventry’s educational focus is placed on the city’s three universities, Coventry University, the University of Warwick and the private Arden University.

But it’s not just further education where Coventry shines – it’s schools, too, offer great options for families thinking of buying or renting in the city.

On the primary school front, Coventry’s best schools include:

Many secondary schools in Coventry are specialist technical colleges, which are joined by two of the city’s oldest schools in President Kennedy School (Outstanding) and Sidney Stringer Academy (Outstanding).

As you might expect from a city so close to Birmingham, quality Asian food is never too far away in Coventry.

For a traditional curry, try Turmeric Gold on Spon Street which is hugely popular with locals, while lovers of Thai and Vietnamese fare should head to Taste Vietnam, also on Spon Street.

For pizza and pasta, Millie’s Kitchen on Market Way is rated highly and is a great option for lunch when out shopping.

Finally, if you live in Coventry, you have to visit Gourmet Food Kitchen on Far Gosford Street. Rated Coventry’s number one restaurant on TripAdvisor, the venue serves everything from superb breakfasts and lunches to multi-course tasting menus in the evenings.

Coventry’s two main shopping centres, Lower Precinct and West Orchards, are home to pretty much every high street brand you can think of.

H&M, New Look, Lush, Next Pandora and Schuh are all located in the Lower Precinct, while West Orchards features Claire’s, Debenhams, M&S and WHSmith.

There’s also a branch of IKEA in the city alongside many independent and boutique shops selling everything from jewellery to bespoke tattoos.

What to do in Coventry

Away from shopping and eating, Coventry offers plenty of options for the weekends.

Coventry’s motor industry heritage is on show at the Coventry Transport Museum, while the Coventry Music Museum celebrates some of the city’s finest musical exports, especially the 2-Tone and ska legends The Specials and The Selector.

If sport is more your thing, rugby union giants Wasps play their home games at the Ricoh Arena in Coventry, which was also home to Coventry City FC until recently.

Whitegates is synonymous with great Coventry properties and has been letting and selling homes in the city for more than three decades.

Our experienced team is on hand to help get you in one of those great properties, whether you’re renting or buying.

Contact the team through the website, give us a call or please do pop into the branch on New Union Street.